After my previous failings at using using solder to cap an extruder barrels open end I have now turned to brazing. The solder method may have worked but it turns out I don’t have any high temperature solder and it was just normal solder that I have been using. I obtained some silver alloy brazing rod off a friend and after shaping the extruder barrel, set about capping one end. 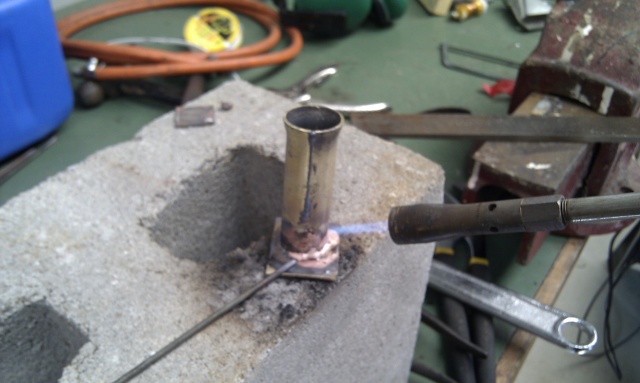 Brazing a flat plate onto the end of the extruder barrel.

The metal I used to cap the end is just a section of pipe that has been cut open and hammed flat. I found it quite hard to get the pipe up to temperature with just the propane burner. A MAPP gas torch would be more suitable for this job. To solve the problem I did the brazing on a cinder block which helped insulate the tube and allowed it to get hot enough for the silver brazing rod to flow.

Once sealed, I cut away the excess metal and cleaned it up with a bench belt sander. After drilling a 2mm hole in the end I wrapped it in polyimide tape I fitted it with fresh nichrome wire and added the thermistor.

The extruder assembly half complete.

Its a little hard to see, but in the image above the left hand side is the brazed end. THe middle section is where the two sections meet. Just enough pressure is applied to stop any plastic seeping out. The auger drill bit only extends in as far as where the two pipes meet. The aim is that after use, everything cools down but the feed pipe will still contain none melted granules, and so can be removed if needed.

After adding roofing insulation and reattaching in to its holder on the drill press it was ready to go.

The extruder finished and ready for testing.

A short time later it was warmed up to some temperature around the 180 degree C mark and began to extrude a beautiful filament of HDPE. However I was still having to do the work of turning the auger drill bit manually. So now the next point to focus on is gearing down the DC motor to drive it. Then some time after that make an automated spindle to collect the filament after its extruded.

Once the mechanical side of things is made reliable enough I can then start to experiment with different additives to make my own custom ‘reprap HDPE’ filament.

I am a Materials Engineering working in the field of Magnetic Materials in Melbourne, Australia. This blog covers my personal interest in all things CNC.
View all posts by Richard →
This entry was posted in DIY Granular extruding and tagged auger, brazing, extruder, granular extruder, HDPE, reprap, silver solder. Bookmark the permalink.