The same friend who has been bringing me the HDPE nurdles recently brought me a new and improved extruder head that he had made in his spare time at his work. As you can see, its a tad more professional looking than my own home made extruder heads.

Each generation of the nurdle extruder thus far. The newest is on the right already rapped in polyimide tape.

Its made from a solid section of aluminium that has been drilled out. At one end is a opening in which a smaller slug of aluminium sits in. This slug makes up the die and can be swapped out for different sizes. Its secured in place by two bolts that are screwed in from the sides. 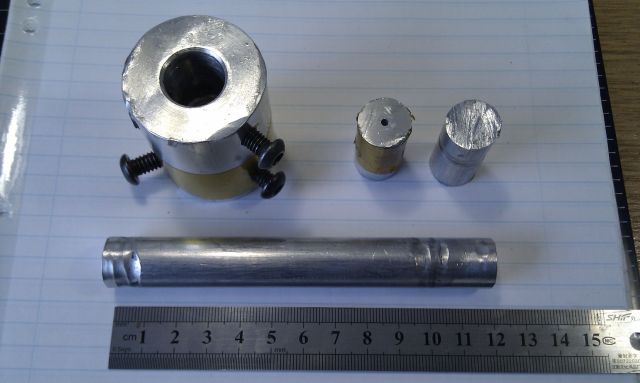 The new extruder. The bars on teh right are inserted and act as the die. The furthest one on the right is a blank ready to be drilled. Just above the ruler is a solid bar ready to be cut to make further die slugs.

Having changeable dies is fantastic as it will allow me to play around with different shape filaments. I could perhaps cut a slit to make a flat sheet, a circle to produce a hollow tube or many small holes to make a multi thread twisted rope. But thats for another day.

At the moment I’m still having trouble getting the auger to turn at a constant speed. Belt slip has been the biggest problem leading to many stops and starts. 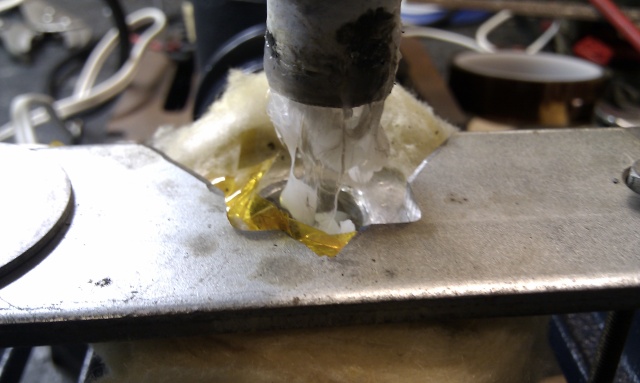 The top of the extruder where the feed barrel connects.

Its a little hard to make out, but your looking at the top of the extruder head where the feed barrel that has the auger in it sits above. When I lifted off the feed barrel it became clear that it had become much too hot and the nurdles were passing their Tg. I had designed against this in my own extruder with the bell shaped end mating with a PTFE wrapped feed barrel. I will need to do something similar for this extruder as well.

I am a Materials Engineering working in the field of Magnetic Materials in Melbourne, Australia. This blog covers my personal interest in all things CNC.
View all posts by Richard →
This entry was posted in DIY Granular extruding and tagged granular extruder, granular HDPE, HDEP, nurdle, nurdle extruder, reprap. Bookmark the permalink.