I stopped in at a printer repair shop today and asked the store owner if he had any printers he was throwing out. He had plenty of old printers out back from which I chose a 10 year old cannon printer and scanner.

After over an hour of dismantling it I was a little disappointed to find there were no Nema 17 like stepper motors that I was after. However there was plenty of other usefully bits. 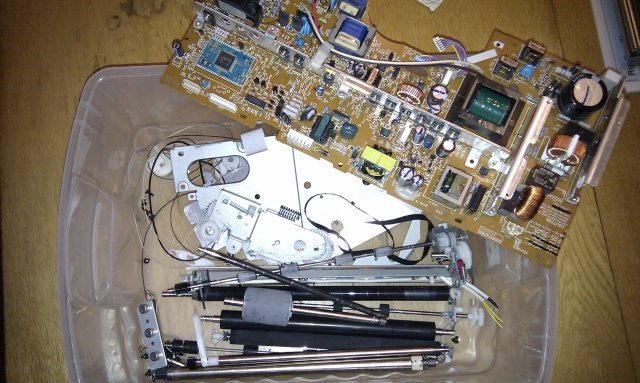 Parts from the printer.

Some of the highlights included two sizeable stepper motors, a collection of solid stainless steel shafts, belts,  plastic gear wheels and a long bladed blower fan. I’m not sure what use the steppers are as I currently have nothing to drive them with.

More parts from the printer including two mirrors and a lens.

Also of use is a full gearbox that is attached to one of the steppers, which could prove to be useful for driving a automatic filament spooler for the nurdle extruder. The blower fan (at the top of the image above)  could be used with hair dryer nickel chromium wire to provide a stream of warm air over the print bed on a Mendel. The shop owner I got this printer from asked what I wanted the parts for and so I explained what a reprap was. He seemed quite intrigued by the idea and so said he would put aside some mote printers he cant fix for me to pull apart. So maybe I will have more luck finding some Nema 17 sized steppers next time. The point here is if you see a printer repair shop in your local area it may be worth sticking your head in the door as old printers are a treasure trove of useful parts.

I am a Materials Engineering working in the field of Magnetic Materials in Melbourne, Australia. This blog covers my personal interest in all things CNC.
View all posts by Richard →
This entry was posted in A Reprap Project and tagged printer, reprap, reprap vitamins, stepper motor. Bookmark the permalink.

2 Responses to Taking my vitamins.