My Mantis inspired repstrap/CNC mill is finally up and running. All the mechanical parts were scavenged used for the repstrap were from old printers. The total cost ended up being around $140AUD. This was all spent on the electronics and includes shipping. Not a single ball bearing was used in the construction of this repstrap. 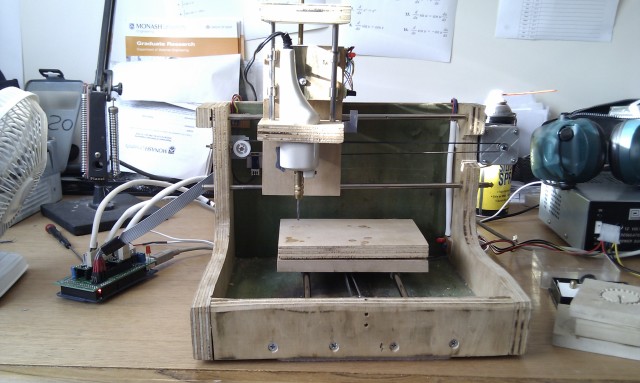 Its 3 three salvaged stepper motors are controlled by an Arduino Mega clone (running 5D firmware) which then commands the 3 Pololu stepper drives mounted using a RAMPS. Unlike the original Mantis CNC its belt driven on the X and Y axis, but still threaded rod driven for the Z. The Mill is an old 10,000RPM engraving tool which was mounted unmodified. 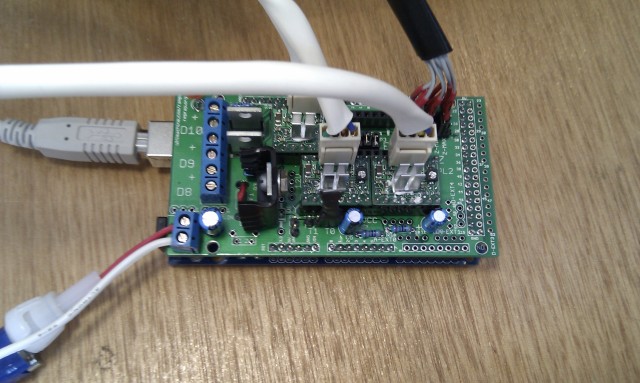 I didnt have any of the correct long female headers (on order from here) which normally go onto a shield above, so instead used normal 2.54mm breakaway male headers.

Powering the RAMPS is a quality thermaltake ATX power supply. This is rated to supply18A at12V and 40A at 5V. More than enough for all my needs, heated bed included. The indicator LED is just bridged across the 3.5v line (with a resistor) and ground to let me know when its on as its very quite when little current is being draw. 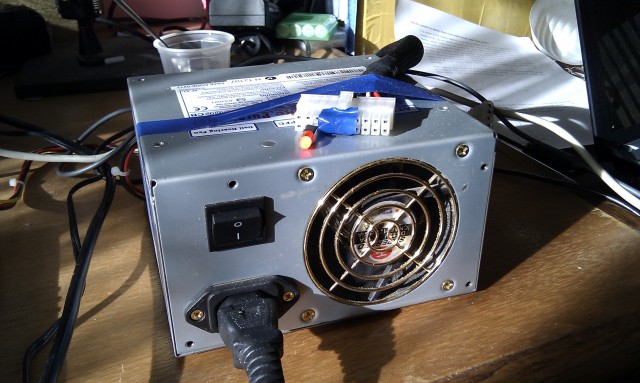 The image below was produced using the reprap host software and milling as if I was extruding. The z axis direction was reversed so that each layer was removed from the surface downwards.

Soon after producing this I discovered that Skeinforge had a milling function and moved onto using this instead. Below is a video of spur gear being produced using gcode generated in Skeinforge. It skipped a tooth soon after starting so I didn’t let this run until completion.

Unfortunately, due to the health risks associated with MDF dust, I wont be using this repstrap for milling anything but PCB’s from now on. It will instead be used as a true repstrap once my Wades geared extruder arrives in the coming week. Then to start printing Mendel parts.

I am a Materials Engineering working in the field of Magnetic Materials in Melbourne, Australia. This blog covers my personal interest in all things CNC.
View all posts by Richard →
This entry was posted in Mendel Build and tagged cnc, mantis, MDF, milling, pololu, RAMPS, reprap, repstrap, skeinforge, wades extruder. Bookmark the permalink.

9 Responses to CNC milling with RAMPS.