Just how popular is the desktop 3D printer now as opposed to a year ago? How popular will it be this time next year? There are a few tools available that may help provide quantitative answers to these questions.

One such tool is Google insight. Google insight is a free tool that’s used by company’s to asses the impact of their product marketing by observing how search interest changes with time and location. It can also give some interesting insight into how awareness of desktop 3D printing has changed over the past 12 months.

For example, the number of searches for the term ‘reprap‘ has continued its relentless growth over 2010 and shows no signs of abating.

The scale bar on the right (0 to 100) just represents the normalised values. In other words, the date with the most searches so far will have a value of 100 and all other points will be some value from 0 to 100 that’s relative to that peak value.

Focusing on only the last 12 months, it can be seen that 3D printing related search terms have continued to experience rapid growth on the preceding 12 months.

What I find interesting about this table is that ‘Reprap’ related search terms are growing much faster than Makerbot related serch terms. This is a little perplexing considering the amount of media coverage makerbot has had over the last year and the shear number of cupcake cnc’s that are out in the wild. Then again, its almost impossible to keep track of the number of Mendel’s in the wild and any media coverage surrounding them.

Looking again at the search term ‘reprap’, this time by region shows another defining trend. 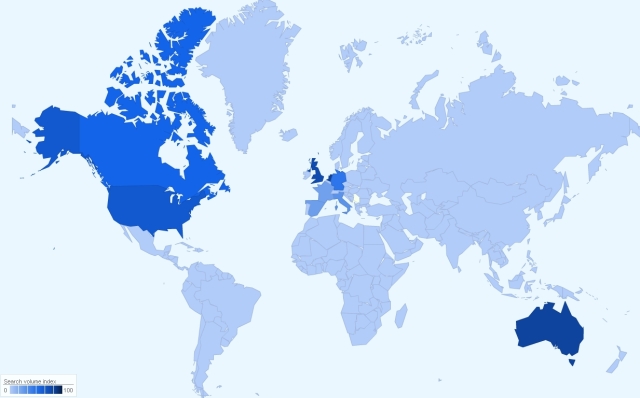 As you would expect, only wealthy first world countries are currently seeking out information about Reprap’s.  Its a little hard to see on this scale, but the Netherlands has shown the biggest increase. Conducting the same search again for the term ‘makerbot’ shows a slightly different picture. 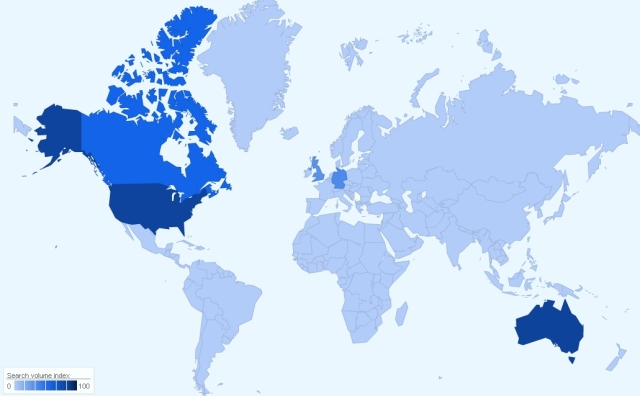 If you look closely at Europe its clear there is less searches for the term ‘makerbot’ when compared to the term ‘reprap’ above. This may again be due to the mostly US based media coverage of Makerbot.

Something else to consider here is that all this information is gathered from google searches only. As google is far from the dominant web search engine in countries such as China (20% market share as opposed to Baidu’s 62%) , it hardly provides a clear picture. Also language barriers may play a part. There is a definite reprap presence in China, and even their own home grown Up! Personal 3D printer which isn’t reflected in the goggle results.

All up one thing is very clear from all this: Desktop 3D printing is growing at an astonishing rate.

Looking into the crystal ball I suspect it wont be long until well established fortune 500 company’s begin to take this emerging domestic 3D printer market seriously. Within a decade we may begin to see sub $1000USD desktop 3D printers from brands such as Epson, HP, Cannon, Brother or even Apple (The iprinter?).

No doubt each company will have a slightly different idea of how things should be done (filament size, plastic type ect) and chaos will ensure until a set of standards can be agreed upon.  Even if this means a Betamax vs VHS style war.. If your under 20, think Blu-ray vs HD DVD.

What worries me the most though isn’t the hardware standards, but the software standards. If each company tries to limit what you can print on ‘their” machine to only 3d models downloaded from their own market place then this will really hurt creativity. Worse still will be if they word cretin user agreements so that any model you upload instantly belongs to them or if they start to censor 3D models they don’t agree with. Imagine the horror if you discovered your brand new shop bought printer wouldn’t let you print a basic female form because it was deemed unsavoury.

Then again, isn’t new technology usually first utilised by the adult entertainment industry?.. Thankfully all these things,  for better or worse, are still years away.

For some interesting discussion on the future of 3d printing take a look at the pages  linked below.