Small electric RC helicopters and multirotors are known for their very short flight times. Even after considerable effort the current record holders (as of Jan 2015) for longest flight time that I can find for an electric helicopter is just under 3 hours (link to owners website) while I have since been made aware (thanks cloidnerux) of a longer flight time of a quad of over 2 hours!

Although these are amazing flight times when you consider their size they are still very short when compared to full sized aircraft. In this post I explore why multirotors, quadcopters in specific, have these short flight times and see where improvements can be made.

How real aircraft do it.

Keeping a rotary-wing aircraft in the air for a long period is relatively straight forward and its something we have known how to do for decades. It is a case of:

When you put these components together you can end up with the 20+ hours flight time seen for the A160 Hummingbird UAV, even with a moderate payload, and I would not be surprised if much longer loiter times have been achieved and not published for obvious reasons.

So what happens when you try to apply these principles to small electric RC helicopters and multirotors?

The bad news: Size matters. A lot. As you reduce the size of a rotor down to that of an RC helicopter or worse, a quadcopter, the rotors lift to drag ratio increases dramatically which in turn lowers overall efficiency. The properties of the air itself does not change for smaller rotors, but rather the way the rotor interacts with the air. Viscous forces come to dominate at high speeds and small rotor length scales meaning that smaller rotors are simply less efficient. Unfortunately, this is an unavoidable side effect of small rotors and is one of the reasons we don’t already have jet packs and flying cars. This is also why the record flight duration for an RC helicopters is nearly double that of an equivalent quadcopter, they simply have bigger rotors that are more efficient due to their size. If it was not for the simplicity of quadcopters over helicopters (think swashplate), they may have never become as popular as they are today.

Another more obvious factor is that batteries are also not as energy dense as liquid fuels. Lithium-polymer batteries have an energy density typically around 150 Wh/kg (higher if you sacrifice C rating) and even the 18650 Lithium Ion cells used by the record holders above are only in the 250 Wh/kg region. In comparison, petrol has an equivalent energy density of over 12,500 Wh/kg and when you consider that around two thirds of that energy is lost as heat in an internal combustion engine this still gives an energy density 16 times that of the best batteries available.

These two factors are the key reason why micro sized (palm of your hand) quadcopters can barely achieve 5 minutes flight time.

How to improve efficiency for longer quadcopter flight times.

So how can we improve on the current endurance record for an electric multirotor such as a quadcopter. The quadcopter mentioned above is already doing all the right things by having minimal weight, large rotors running on efficient motors at low rpm, the highest energy density batteries available and minimal obstructions to the air stream.  So where to from there?

Make it bigger. The most obvious answer by now is perhaps to simply make it bigger. Bigger rotors equal less drag for a given thrust and so longer flight times. However, before you start building a house size quadcopter note that there are a few problems with this idea. Things get very expensive very quickly, the rotors become much more dangerous to be around and worst of all the angular momentum of the rotor can become so large that the rapid rpm changes needed to maintain the stability of a quadcopter become difficult or even impossible. One solution to the latter problem is to add a collective pitch setup like a helicopter, but then aside from the maneuverability benefits you may as well use a standard helicopter platform which will be lighter and more efficient anyway. So supposing we want to keep the footprint (rotorprint?) of the quadcopter fixed to around the same size as that shown above then what other options are there? Some possibilities are as follows: 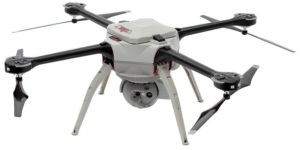 In short, compared to an open rotor, an optimally designed ducted rotor of the same size can expect a reduction in power consumption in the order of 60%. Needless to say, thats quite a lot even after considering a weight penalty for the ducts themselves. This reduction in power consumption is due to a few factors that we will be elaborated on shortly. What’s more, thrust can be increase by nearly 100% if you keep the power consumption at the same level as an unducted rotor. I believe the reason for the debate on this topic on RC forums is that people who try this at home nearly always use commercially available electric ducted fans (EDF) as seen in these many videos. These fans, which are designed for fast level flight and not static hovering, are not the right tool for the job. They normally have a much smaller propeller diameter than an equivalent quadcopter rotor and a duct shape that adds little additional thrust for hovering. An example is shown below: 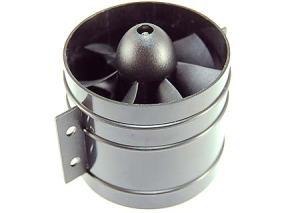 A more efficient duct shape is shown by the slightly exaggerated profile below. Notice the large slope on the inlet lip and the expansion of the duct cross section downstream of the rotor.

There are three main ways in which a duct is able to improve thrust:

If you are interested in designing your own duct I suggest you read the source mentioned earlier. I believe that if well designed and reasonably light weight ducts can be added to a quadcopter it should dramatically improve flight time. However, please keep in mind that ducted rotors will degrade horizontal flight performance and make the quadcopter more susceptible to high winds due to the larger cross sectional area. As a result, FPV racers need not apply and instead its use may be limited to the many applications where flight duration or carrying capacity are of most importance. 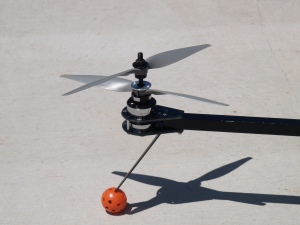 An example of a contra rotating rotor (Credit: Ed Kirk)

However, apparently for a for ducted contra rotating rotors the pitch requirements of the secondary rotor become far simpler and so off-the-shelf rotors may be all that is required to get a good effect. So when used in conjunction with ducted fans perhaps even greater endurance could be reached while maintaining the same footprint.

Thinking outside the box.

A more radical suggestion for increasing flight duration is to try to combine the large rotor area, and thus lower relative drag, of a traditional helicopter with the simplicity (no swashplate) of a quadcopter. But how to achieve this?

One possibility would involve a large singular centrally located ducted rotor to provide lift and then four smaller rotors on the exterior for stability. So long as the smaller motors are only used for pitch, roll  and yaw control this will lead to an improvement in overall efficiency with a small weight penalty. Stators (non-rotating fins) can be used to prevent rotor swirl causing yaw or, alternatively, the more efficient contra-rotating setup can be added.

In fact such a multi rotor craft already exists, and its aim at the military. See Reference Tech’s Hummingbird series. 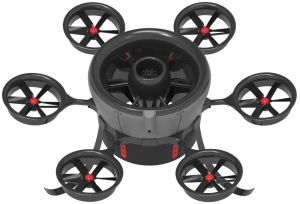 An in depth video on the older hummingbird 1 can be found here. Running on batteries, the hummingbird 1 has a claimed dwell time of over 2 hours and is not much bigger than a conventional quadcopter. So not only is it possible to break the 2 hour mark, its already been done. What’s more, the petrol model has a stated incredible 5 hours dwell time and is used as a hybrid configuration where the ICE is only used to produced electricity. The model shown above uses 6 exterior rotors but I see no reason why four would not work equally as well. Perhaps the 6 rotors was decided on for redundancy reasons for military use.

So, is there room for improvement on the current duration records for quadcopters? Most definitely. Electrically powered, multirotor stabilised, contra-rotating ducted fans have already shown what’s possible. Will a multirotor ever be able to beat the endurance of an equivalent weight helicopter? Highly unlikely, but there is no harm in trying.

If you have found this interesting stay tuned as I intend to follow up this post with designs for a ducted fan multirotor that can be built using commonly available hobby-grade parts.

I am a Materials Engineering working in the field of Magnetic Materials in Melbourne, Australia. This blog covers my personal interest in all things CNC.
View all posts by Richard →
This entry was posted in Multirotor Projects and tagged ducted, efficiency, flight time, helicopter, hummingbird, longest, multirotor, quadcopter, rc, record, rotor, shrouded. Bookmark the permalink.