Bootstrapping a pen plotter to make a 3d printer

Back in 2010 I developed an intense interested in understanding and eventually building a 3D printer. This interest took me down the path of reading all the material available at the time and purchasing a RAMPS (V1.2) which I used to control a modified mantis made from parts found in disassembled printers with the eventual goal of turning it into a 3D printer. Although I came quite close to finishing this project I found that my my interests shifted when I moved out of home and started a full time PhD materials engineering. My ‘engineers itch’ was being more than satisfied by my day job and so this project has sat on the back burner for quite some time.

Now that I am approaching the end of my PhD and spending less time in the lab during the day I have decided to pick up where I left off. Unfortunately, the oversized mantis (dubbed the gunstrap) has long since been disassembled and thrown out. I do however still own a scientific pen plotter which I did a tear down on here and works quite well when controlled by RAMPS. The video below is this RAMPS powered pen plotter in action:

I had planned on replicating this pen plotter design to use as a 3d printer. Although I never found the time to undertake this project, it looks like a few others have adopted this design for their own printers. Note that this XY axis style has been used by 3d printer enthusiasts long before my pen plotter tear down.

Not having the time or parts to build one of the above printers I decided to use the pen plotter itself as the base for the XY axis of a 3d printer. The following photos show what I came up with.

The z-axis design is based on the common linear bearing with threaded rod design. The rods, stepper motor and aluminium plate are all donated from old laser printers. The pen plotter had its inner plate removed to allow for an extruder. Here it is setup for testing. 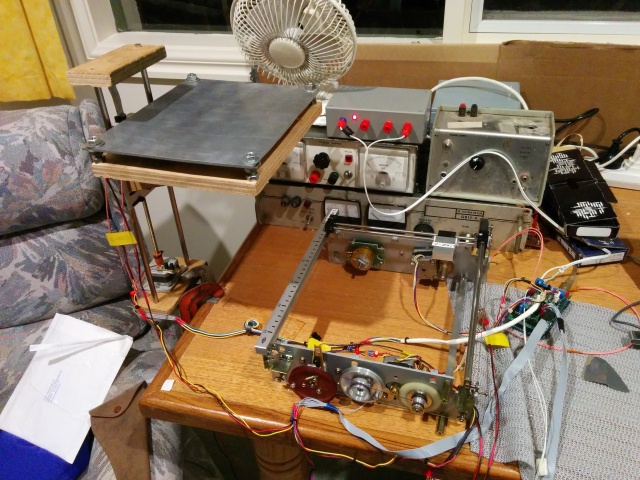 The heated build platform is heated by aluminium clad resistors that are thermally glued to the plate.

A dedicated 12V computer PSU is used to drive the heated build platform through a low on resistance FET. Total build platform power output is around 100W. enough to for ~90c.

The extruder hot end is machined from a single shafter of stainless steel based on hydraraptors ‘no compromise’ hot end design. Two enameled resistors are located in the hotend with a total output of 100W at 24v.

Another view of the hot end. The resistors are located in piece of machined aluminum which is grub screwed onto the stainless steel shaft.

This hotend is fed a 3mm PLA filament from a geared wades extruder via a PTFE tube. Here is the hotend attached to the plotter. 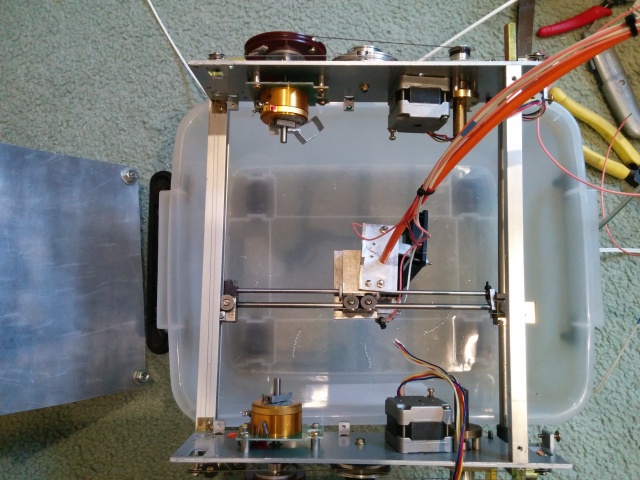 This whole setup was then mounted in a wooden frame. 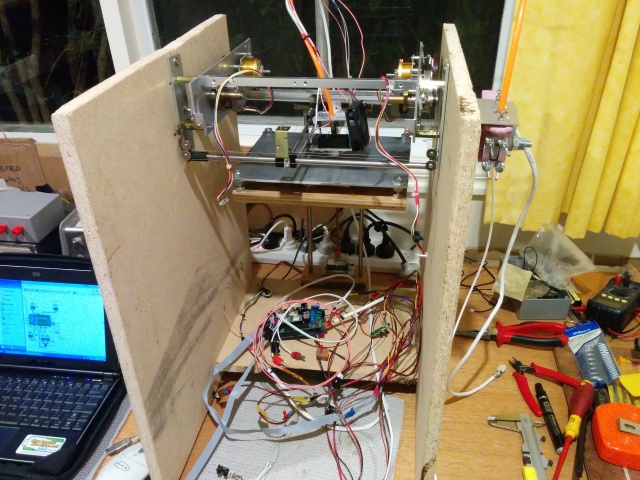 Playing around with deisgn a few problems become apparent. The build area is severely restricted due to the way the hot end is placed. However the biggest problem is a lack of z-axis stability due to play in the x and y axis.

There is simply not enough support for the central spar as seen above.

I am currently thinking of stiffening this axis with a secondary plate and some additional bearings as shown with the layout below.

However this will require some more work. I have also since had some ideas for an unconventional X-Y axis layout that may be much more suited to 3d printing. More about that next post.

I am a Materials Engineering working in the field of Magnetic Materials in Melbourne, Australia. This blog covers my personal interest in all things CNC.
View all posts by Richard →
This entry was posted in Mendel Build. Bookmark the permalink.