The ideal shape for a multirotor ‘ducted-fan’ that can dramatically improve thrust and flight time.

2018 update: User Wob Barley has built a working model of this duct based on David’s model (see update below) and done some tests which suggest an impressive 40% efficiency/40% thrust increases over open propellers. Here is a video of the test flight.

A discussion of the work over on the rcgroups forum.

2016 update: David has produced a great customizable OpenSCAD file based on the study referenced in this post. The file can be found over at thingiverse here (thing:1535549).

In a previous post I discussed how the addition of a well designed duct can reduce hovering power consumption of a rotor by over 60% or alternatively nearly double the thrust if power consumption is kept at the same level as the unducted rotor. These claims are based on a scientific study conducted on this very topic which can be found here (Mirror here) (Jason L. Pereira 2008).

If you want to have a go at testing these claims for yourself then this post will hopefully give you an idea of what kind of shape that duct needs to be and also suggest some possible ways to construct it.

The perfect duct for hovering 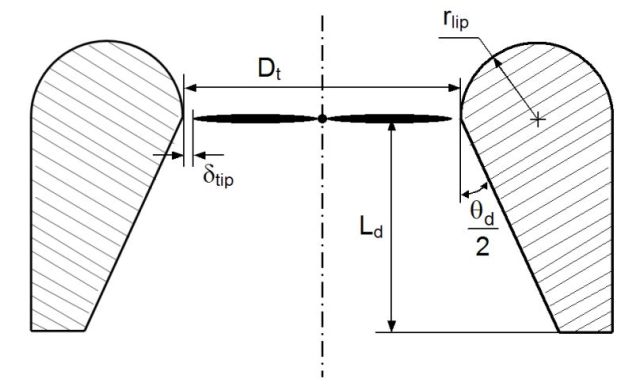 According to the study the optimal optimal configuration found experimentally includes a δtip = 0.1%Dt,  rlip = 13%Dt, θd = 10◦ and Ld = 50% to 72%Dt. I have used sketchup to mockup what such a duct would look like for a 5″ rotor as seen below. Note that I went with Ld = 50% to try and keep the overall length to a minimum and also made it a single surface by using the inner wall only.

The same duct can also be extended slightly for a contra-rotating setup and shown below.

The dimensions for a single rotor duct are shown below (larger views available) for a 5″ rotor. Scale accordingly for a rotor of your choosing, but be sure to measure your rotor first as it may not be quite what you expect. 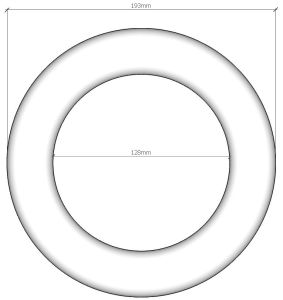 SIde view with dimensions.

You can find a copy of the sketchup model here.

The most difficult part about making a duct for a multirotor will be keeping it light enough that you do not offset the respective gains. Thankfully, the literature suggests that when done correctly the additional thrust gained is so large (~90%) that you would need to nearly double the weight of your multirotor to cancel out the gains.

Remember though, if you only want to bench test the thrust or efficiency improvements (as I hope to do eventually) then the duct can weigh whatever you want, it doesn’t matter. The following is a list of suggestions for how you could achieve a lightweight duct.

The most difficult part of the build would be getting the blade tip clearances as close as possible, as this has a big impact on efficiency but also requires very tight tolerances. One way around this problem is to build the duct quite roughly and then line the inside of the duct where the rotor will be placed with a material that can be scraped away by the rotor as it turns. Something like expanding gap filling foam may be perfect for this. Once the rotor scrapes away the excess foam you should be left with blade clearances measured in fractions of a millimeter.

If you do end up trying something let me know as I would be really interested to see what you came up with and how you went.

I am a Materials Engineering working in the field of Magnetic Materials in Melbourne, Australia. This blog covers my personal interest in all things CNC.
View all posts by Richard →
This entry was posted in Multirotor Projects and tagged build, design, dimensions, duct, ducted, how to, multicopter, multirotor, quadcopter, shape, shroud. Bookmark the permalink.

43 Responses to The ideal shape for a multirotor ‘ducted-fan’ that can dramatically improve thrust and flight time.